For 16 years I was part of a seeker-sensitive church which followed the church marketing and leadership principles of Bill Hybels and the Willow Creek Association (Global Leadership Network). We had a vision statement. We hosted the Global Leadership Summit. We had sermon series based on Bill Hybels’ books and we were expected to buy a copy. In other words, we were a  Willow Creek clone. We were not a “mega-church”, but we were still one of the biggest churches in the city. In fact, we could have probably been the biggest church in the state if people did not keep leaving. And it was clear (at least to me) that the reason so many people kept leaving was the problems caused by Bill Hybels’ leadership and church marketing principles. The seeker sensitive church means well, but there is a dark side to it.

I decided not to name my former seeker-sensitive church. I do not want to write a bitter and twisted social media rant about how badly we were treated. I will write in more general terms since our church’s problems were not unique. Other seeker-sensitive churches have had similar experiences. They are often what happens when a church implements Bill Hybels’s ideas.

The seeker-sensitive church movement has good intentions. They want to reach the unchurched who have little experience of Christianity. I know of incidents where people from non-Christian backgrounds have gone along to a traditional church service and they found it so weird and alien, they became stressed and had to leave. I agree with the seeker-sensitive movement in that we need to strip away the cultural baggage and stumbling blocks, the church traditions and practices which are not Biblical but appear to be turning people off Christianity. We need to communicate the Gospel in ways that those, who need to hear it, can understand it. However, when seeker-sensitive churches try to do this, it often goes wrong. I hope to explain why.

In Part One I will argue that so-called seekers are not really seeking God.

In Part Two I will discuss the problems which can arise from the seeker-sensitive church movement’s concept of vision.

In Part Three I will look at how the seeker-sensitive church movement has taken secular business leadership and management practices  and applied them to churches, and surprise, it hasn’t worked.

In Part Four I will discuss Bill Hybels’ acknowledgement that Christians in their churches were not growing and their inadequate solution, the scandal which resulted in Billl Hybels’ resignation and I will argue the seeker-sensitive church model is based on an unbiblical definition of the church.

(There are other seeker-sensitive churches which are not necessarily Willow Creek clones which follow Bill Hybels’ ideas. They may still experience some of the problems which I will describe. Nevertheless, the reader should assume that, unless I say otherwise, when I use the term “seeker-sensitive church”, I am referring to one based on Bill Hybels’ leadership and church marketing principles.) 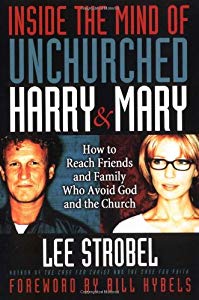 Actually, people had rejected God long before the Church came along. The Bible says that the “carnal mind is enmity against God” (Romans 8:7). That sounds like we have rejected God to me.

The seeker-sensitive church movement assumes that the unchurched are really seeking God, but the church is irrelevant and cannot help them. Lee Strobel writes that “an overwhelming 91% of non-Christians believe that the church isn’t very sensitive to their needs. And in the eyes of our self-centered, consumer-orientated society, that’s the ultimate sin.” (Inside the Mind of Unchurched Harry and Mary, p 47)

The church supposedly needs to show that Christianity is relevant and works and that it meets the felt-needs of non-Christians. In Willow Creek Seeker Services Gregory Pritchard  writes,

“The messages must have high user value. When Unchurched Harry comes here for a service, he’s going to be asking, ‘What value does my being here have for my life’ … The primary purpose of Hybel’s Christianity 101 is to help Unchurched Harry. If Hybels can show that Christianity works, that it is helpful in meeting Harry’s felt needs and fostering greater personal happiness, Harry will be interested and come around. Hybels’ ultimate goal is to get Harry to understand the gospel and make a commitment to Christ. Christianity 101 is a means to that end,” (G. A. Pritchard, Willow Creek Seeker Services, Baker Books, Michigan, 1996, p 146)

Like marketers in the secular world, seeker-sensitive churches often conduct surveys of the non-Christian community they want to reach. I believe it is important to understand what non-Christians around us actually beleive. Do most of them still have a nominally Christian worldview or are they more secular and postmodernist in their thinking? The answer will shape who we present the Gospel to them.

However, seeker-sensitive church surveys are more concerned with identifying the “felt-needs” of the non-Christian community and showing that God can meet their needs and give them what they want, rather than identifying how to best communicate their need for the Gospel. “Felt-needs” are what people think they need or want. What they think they need is not what they really need, God’s forgiveness for their sins. A lot of people in my city have a “felt-need” for cheaper illegal drugs, but that does not mean seeker-sensitive churches should help them get their needs met.

Lee Strobel said we are a “self-centrered, consumer-orientated society.” They have a sense of entitlement and demandingness. They expect to get what they want. This is sin. Instead of addressing this sin and all the misery it has caused, calling people to repent of their self-centredness and entitlement and find forgiveness in Jesus, the seeker-sensitive movement inadvertently reinforces their “what’s in it for me” attitude. So-called “seekers” are not seeking God. They may be seeking what they think Gods can give them, a better successful life, a sense of wholeness, fulfillment and purpose, but they are not seeking God. Perhaps, we should think of them as “wanters”. They come to church because they want something. Instead of Jesus meeting their real need, forgiveness from the wrath of God, Jesus becomes a means of giving them what they want or think they need. It is reminiscent of what Paul warned about,

“For the time will come when they will not endure sound doctrine, but according to their own desires, because they have itching ears, they will heap up for themselves teachers; and they will turn their ears away from the truth, and be turned aside to fables.” (2 Timothy 4:3-4)

The seeker-sensitive approach is a bait and switch. It sends mixed messages. The self-centred Unchurched Harry comes along to a seeker-sensitive church with a sense of entitlement, expecting to get what he wants. The church caters to and reinforces his self-centredness. It is still about him. The plan is that he hangs around for long enough, he will somehow hear the Gospel with the opposite message that he must deny himself and repent.

The seeker-sensitive approach fails to distinguish between good news and good advice. Seeker-sensitive church “sermons” often consist of good advice. Biblical principles for improving your life in some way, which one does not even need to be a Christian to apply. The advice may be true and Biblical, and there is arguably a time and place for Biblical good advice, but is not good news, the Gospel. No one was ever saved by hearing good advice.

Some seeker-sensitive churches seem to be reluctant to preach the Gospel to the unchurched. They appear to be afraid that if they tell them they are sinners and they need to repent and be forgiven, they will be offended and not come back. In an article, “How the Church Growth Movement Drives the Gospel Out of Churches” Bob DeWaay gives an example of this,

Churches can also have a hidden curriculum. Two churches could have identical doctrinal  statements, yet the atmosphere of the service, the style of the music, the way the minister behaves during the sermon, even the architecture of the building can communicate to the congregation a different attitude towards God and our state before Him. The hidden curriculum of seeker-sensitive churches can have the unintentional consequences that if we make church too safe and too comfortable, it can send the message that we can come to God on our own terms. It further reinforces their self-centredness , rather than challenges it.

At my old seeker-sensitive church I heard about two women who were supposedly Christians.  They dropped out of a discipleship course  because they said they did not want to read the Bible, It was all about them and what they want. There was no understanding that being a Christian means dying to yourself and what you want and making Jesus your Lord and doing what He wants.

My old seeker-sensitive church  would hold baby dedication services. One of the favourite “life verses” (another Bill Hybels idea) chosen by parents was Jeremiah 29:11 in the New International Version which reads,

“For I know the plans I have for you”, declares the Lord, “Plans to prosper you and not to harm you, plans to give you a hope and a future.”

The key word is “prosper”. There is the assumption that God is there to prosper them and give them a good life. Verse 13 about seeking God with all our hearts is ignored. In context, the verse is about how God will still forgive and restore us if we repent and turn back to Him, so I hope this “life verse” will still be applicable but not in the way they assume.

Christianity is not about life improvement. It is true that if you adopt some Christian principles  and do not engage in self-destructive sinful behaviour, your life can get better. However, the Bible warns us that we will be hated and persecuted for being Christians (John 15:18-20, 2 Timothy 3:15). When many people become Christians, their lives will get worse, not better. Christianity is not about improving your current life, pouring hew wine into old wineskins (Matthew 9:17). It is about crucifying your old life and receiving a new life in Jesus (Romans 6).

In spite of my objections to church marketing, I am going to use a marketing analogy. If I have a product I want to sell and other people are selling similar products, there has to be something  about my product which differentiates it from similar products so people will buy mine and not others. If the seeker-sensitive church is going to be just like the world, validating their felt-needs, appeasing them and not challenging them with the Gospel, then what is the point of going to church? If Christianity is just a life-improvement course, I can read an Anthony Robbins book, rather than get up on Sunday morning.

To be continued in Part Two

I am a small business owner and I live in northern Tasmania. I am a graduate of the University of Tasmania and I have a Master of Arts in Early Christian and Jewish Studies from Macquarie University. I attend a Reformed church. I have been a teacher librarian, New Testament Greek teacher, branch president and state policy committee chairman of a political party, university Christian group president. My interests include ancient history, early Christian history, the Holocaust, Bible prophecy, revival, UFOs, peak oil and science fiction. View all posts by Malcolm Nicholson