The truth about Maria Orsic, the Vril Society and ancient aliens from Aldebaran.

While I was researching the connections between the Nazi esoteric beliefs and modern beliefs about Atlantis and ancient aliens, which I have written about here,  I came across references to Maria Orsic, an Austrian Medium and member of the Vril Society. In 1919 Maria claimed to have received telepathic messages from the planet Sumi-Er in the Aldebaran solar system, about 68 light years from Earth. These messages said that the Sumerians of ancient Mesopotamia had come from Aldebaran 500 million years ago and the Aryans were their descendants.

I did not believe that aliens from Aldebaran really had communicated with Maria Orsic, but it did look like I had come across evidence for belief in the ancient aliens theory in pre-Nazi Germany.

I soon realized the story of Maria Orsic is a hoax.

There are a lot of dodgy and unreliable claims about the Nazis and the occult. In my research I had come across numerous references to the Vril Society. According to Michael Fitzgerald, its members included Hitler, Hess, Goering and Himmler (Michael FitzGerald, The Nazi Occult War, Hinkler, Victoria, 2013, p 40).  I assumed they were a real group, like the Thule Society whose members included Nazi leaders Rudolf Hess and Hans Frank. However, some doubt that there ever was a Vril Society. Wikipedia says, “there is no evidence for the existence of such a society.”

The name comes from a 1871 novel The Coming Race by Edward Bulwer-Lytton (1803-1871). This is the story of a man who discovers an advanced underground civilization which is powered by an energy source called Vril which gave it inhabitants telepathic powers.

This was taken seriously by Helena Blatavsky, founder of Theosophy in her books Isis Unveiled (1877) and The Secret Doctrine (1888). Another Theosophist William Scott-Elliot wrote in his 1896 book The Story of Atlantis  that the Atlanteans’ airships were powered by Vril energy (W. Scott-Elliot, The Story of Atlantis, Theosophical Publishing Society, London, 1896, p 51-54). In Germany an Aryanized version of Theosophy developed, called Ariosophy.

Willy Ley, a former German rocket scientist, wrote in a 1947 article “Pseudoscience in Naziland” that there had been a group in Berlin which believed in Vril.

In a 2002 book Black Sun, Aryan Cults, Esoteric Nazism and the Politics of Identity, Nicholas Goodrick-Clark says that there was a Vril society,

“German researchers have recently established that such a group did exist in association with the astrological publisher Wilhelm Becker. This wholly obscure “Reichsarbeitsgemeinschaft ‘Das Kommende Deutschland'” published a short brochure Vril: Die kosmische Urkraft (1930), which described the Atlanteans as possessors of a spiritual “dynamo-technology”, superior to the mechanistic notions of modern technology, Based on Vril energy, this technology also enabled the Egyptians and Aztecs to build their pyramids.” (Nicholas Goodrick-Clark, Black Sun, Aryan Cults, Esoteric Nazism and the Politics of Identity, New York University Press, New York, 2002, p 166)

While it does appear there was some sort of Vril society or society which believed in Vril, there is no evidence it was as influential as some claim. They are making it up. Vril: Die kosmische Urkraft , which can be read in German here, says nothing about Maria Orsic.

In 1992 two Austrians Norbert Jurgen-Ratthofer and Ralf Ettl wrote a book The Vril Project  which contained the first mention of Maria Orsic and Aldebaran . Ettl was a member of the Temple Society in Vienna, a Gnostic group which was founded by neo-Nazis and claimed to be successors to the Knights Templars.  (Black Sun, p 164-169).

The Vril Project has not been published in English. However, in 1994 Jurgen-Ratthofer and Ettl  made a  “documentary” called U.F.O. Secrets of the Third Reich which claims that  the Vril Society was founded in 1919 and Maria Ortisch, who was played by Simone Bernhard in the dramatizations, received telepathic messages from Aldebaran. These included instructions to build a time machine which was not completed, but were the inspiration for the Nazi flying discs which were first built in 1934. This documentary can be found on YouTube.

If the Nazis really had this advanced flying disc technology which they received from aliens, one wonders how they could have lost the war. Claims that the Nazis had built the original flying saucers have been around since the 1950s. A critique of these claims can be found here. Before the Maria Orsic story the claims were that the Nazis had built these flying discs themselves. Some of these came from neo-Nazis who were trying to show how advanced the Nazis were. Much in the same way that the ancient aliens theory assumes that people in the ancient world could not build ancient monuments and buildings themselves and needed the help of aliens, the Maria Orsic story assumes the Nazis could not build their own flying discs and needed the help of aliens

Subsequent writers, websites and documentaries built on and embellished the Maria Orsic – Aldebaran story, such as The Aldebaran Mystery, UFO Secrets of the 3rd Reich and World War II and the Ancient Aliens episode “Aliens and the Third Reich” which claim that Maria was taken on a spaceship to Aldebaran at the end of the war. This sounds like an attempt to explain why there is no evidence for her existence.

The 1994 documentary U.F.O. Secrets of the Third Reich contained this drawing of what Maria Orsic was supposed to look like.

This sketch appears to be  based on the 1994 original

The photo  below is supposed to be of Maria Orsic 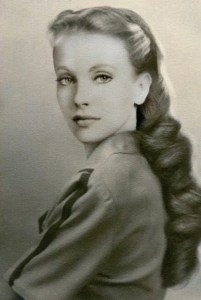 It appears that the face from the second picture was superimposed onto this photo and then reversed. I do not know who the woman in original photo is. 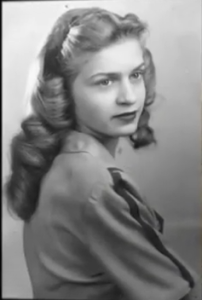 Then, there is this supposed photo of Maria Orsic.

This is a woman’s face superimposed on a photo of Hitler. Here is the original.

[After I had posted this, someone said the woman’s face in the above photo is Kate Moss.]

If you search for photos of Maria Orsic on the Internet, the results include

Nena von Schlebrugge (b, 1941), a former model who is  Uma Thrman’s mother

and Claudia Black, star of Farscape and Stargate SG 1 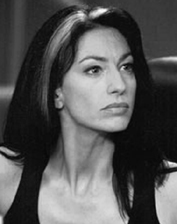 There is no evidence from before 1992 for the existence of Maria Orsic or the claims the Vril Society were in contact with aliens from Aldebaran.